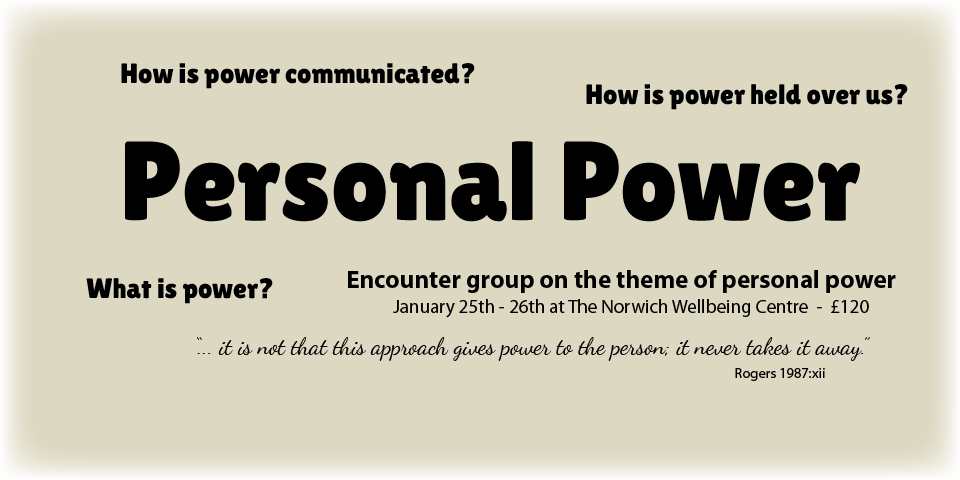 Encounter group on the theme of personal power

We prefer not to write a reductive sentence or two about ourselves, which would have implications of power concerning what we include and exclude. Let’s all meet each other at the same time.

An environment of encounter is an opportunity to be open to interaction and the interplay of power. We are inviting you to focus on your experiencing of power. What is power and where does it reside? How is power held over us? How is power held within us? How is power communicated and expressed between us? How is power relevant to various aspects of our identities? What is the relationship between power and control? Who is responsible if someone in the group feels powerless? Are we sometimes afraid of our own power? Can personal power be perceived as power-over others?

“When it (philosophy of person-centred approach), is lived, it helps the person to expand the development of his or her own capacities….also stimulates constructive change in others. It empowers the individual, and when this personal power is sensed, experiences show that it tends to be used for personal and social transformations.”

“Art is no longer about power and privilege but participation… Art can release us from the need to possess objects of power and allow us to enter the field in which the power of objects frees us.”

“I do not think a society could exist without power relations, if by that one means the strategies by which individuals try to direct and control the conduct of others. The problem, then, is not to try to dissolve them in the utopia of completely transparent communication but to acquire the rules of law, the management techniques, and the morality, the ethos, the practice of the self, that will allow us to play these games of power with as little domination as possible.”

‘…no apology is needed for making assumptions. Apologies are needed when the assumptions are not stated or not clear’. ..A person’s assumptive systems powerfully affect and are affected by his emotional states’.

Carkhuff Sources of gain in counselling and psychotherapy, 1967:102

‘…along with the ethical urge of each individual to affirm his subjective existence, there is also temptation to forego liberty and become a thing. This is an auspicious road, for he who takes it – passive, lost, ruined – becomes henceforth the creature of another’s will, frustrated in his transcendence and deprived of every value. But it is an easy road; on it one avoids the strain involved in undertaking an authentic existence,’

For more information, a booking form can be downloaded here: Encounter group on the theme of personal power, or you can email ktazze@gmail.com.